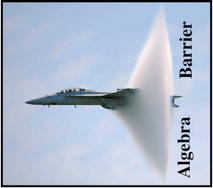 It’s no news that students that are successful learning arithmetic often stumble and even fall, without ever getting up, when faced with learning algebra.
As a math and science educator, I can report that little attention is given to laying the conceptual groundwork students need to make the transition from arithmetic to algebra.

When classroom computers became available in the early 1980s (my first computer was an 8K Commodore PET with tape cassette drive), I believed that finally, we had a tool that would make learning algebra not only relevant but also easy! That belief was—and still is— based on the fact that programming requires algebraic thinking.

Perhaps the most fundamental concept in algebra and programming is the concept of a variable. In the typical algebra text, the variable concept is briefly mentioned and then quickly followed by the never-ending song and dance between the x’s and the y’s. The variable x becomes synonymous with unknown and for many students, the x and algebra itself remains an unknown.

Dr. Zalman Usiskin, in his article, Conceptions of School Algebra and Uses of Variables discusses and gives examples of the five different ways the variable concept is used in algebra. [Click here http://oak.ucc.nau.edu/smg224/401pdfs/algebrareadings/usiskin1.pdf
to download a copy of his article.]

He goes on to say that computer programming makes use of all five uses of the variable! For this and many other reasons (problem-solving and logical thinking are just two) I hope my grand kids are willing to learn introductory programming so that I can help them understand the importance and relevance of algebra.
It is in this spirit that I have started a second blog devoted to helping beginners learn to program, maintaining contact with the teachers I work with, and to having a place to share my math and science programming projects. To visit Pops’ Scratch Blog, go to
http://www.scratch-blog.com 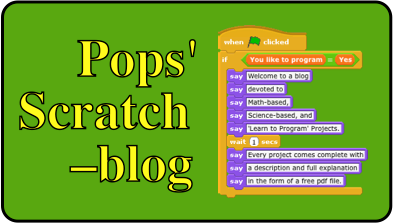 The Scratch programming language is free and can be downloaded at
http://scratch.mit.edu/
and while you’re there, check out the site as it is a very friendly place for kids of all ages and offers the opportunity to become part of a programming community that has 12 million registered members that have created and uploaded almost 14 million programming projects.

Posted by grandadscience at 2:26 PM