Boys and a Summer Day in Virginia

Grand kids Asher and Kate were back in Georgia but G-mom and I had another week’s visit in Virginia. Out son was being promoted to Lieutenant Colonel and there was no way we would have missed the pinning ceremony.
Along with the summer fun of swimming, playing board games, eating ice cream, and all of the other summer activities there does come a time for chores. The flowerbed in the front yard needed weeding so the boys and I donned gloves and with the sun hidden behind afternoon clouds, we whistled off to work.
The boys soon found that gathering squash and tomatoes for mom was much more fun than pulling weeds. And, they were excited about putting food on the table.  So I pulled weeds.
The house sits on a corner lot with large drainage ditches instead of curbs that direct rainwater into a corner culvert. This photo shows one of the ditches and the bridge from the street to the front porch of the house. We were supposed to be weeding in the flowerbed on the left side of the photo. 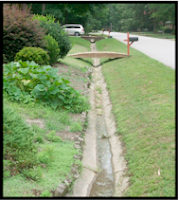 Dirt had accumulated in one of the ditches and a few weeds had taken root. The boys began pulling these weeds but soon found it much more interesting to dig in the dirt. It quickly became a contest as to who could build the tallest dirt mound that once that was settled transitioned into filling cardboard boxes with dirt.
The boys decided they would like to mix mud in the cardboard boxes to make the mounds stronger so they uncoiled the garden hose and drug it to the ditch. I warned the boys that adding water to the dirt in the boxes would quickly weaken the cardboard but, as grand kids often are, they were skeptical.
One of the joys of being a grand parent is letting the grand kids, as long as the activity is safe, find out for themselves how things work in the real world. I try to curb my need to explain everything and to just let the kids find out on their own the consequences of their actions.
The boys added water to each box of dirt and for the first minute the seams held but then each box burst open and the boys were excited as to how the mud oozed out, into the ditch, to be swept away by the running water from the hose. In this photo John and Andrew are shown at the intersection of the two ditches. John is hosing the last of the dirt down the ditch as Andrew starts to build a dam. Damming a stream of running water comes as natural to boys as going barefoot. 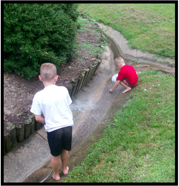 What I’ve just written describes just the first hour of a memorable summer afternoon. In the next post, I will share what the boys and I did during the second and third hours.

G-mom and G-dad are having a wonderful time visiting kids and grand kids living in the Eastern half of the country. So far we’ve been to Augusta, Georgia to be with Gene, Winona, and grand kids Asher, Kate, and 2-month old Emma. Dr. Gene had to stay in Augusta to look after his patients while the rest of us drove to Yorktown, Virginia, to visit, Lt. Col. James, Ann, and the grand sons John and Andrew. They too will soon have a new baby brother or sister.
What a joy it is for the ‘cousins’ to spend time together and get to better know each other as they grow into school age. It’s been hot in Virginia so swimming in the Residents Pool has been a lot of fun and a welcomed relief from the heat.
The boys even got away for an afternoon of golf, the miniature version, followed by ice cream. In this photo Asher tees off as others watch. John, on the right, won the match, and Andrew, on the left had a hole-in-one as did Asher. 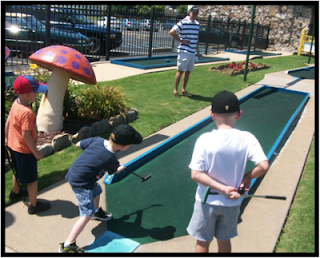 Another way to beat the afternoon heat is to play with the iPads. Every family has at least one iPad so the boys can all play at the same time.  John, the oldest, starts second grade next year as Andrew (in the middle) and Asher attend Kindergarten. Kids are at ease with these techno-tools and I want them to play games that have strong problem-solving elements. Such games help kids develop the problem-solving skills (perseverance for example) that are not dependent upon school content. 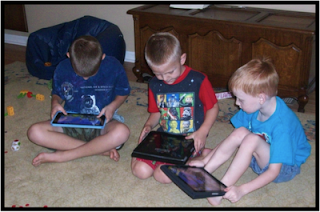 The boys like to play Star Wars Pit Droids (see The Return of the Star Wars Pit Droids post - February 2012) and are well into the second level where the problems are much more challenging. Of course playing the game along with the boys gives me the chance to help them think through the difficult sections. This photo show a level two problem that requires directing pit droids of different colors (color is just one of many attributes a pit droid can have). 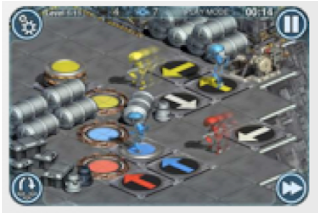 Kids like the physics-based puzzle games so I tried to download the classic The Incredible Machine to the iPads but it is no longer in the APP store! I have it on my iPad so the kids had to take turns playing the game. I also have Casey's Contraptions, a game similar to The Incredible Machine loaded in my iPad but it also is no longer available in the APP store. I did find  the game Crazy School in the APP store for $0.99.  It’s not as extensive as the other two games but I did download the game to all of the iPads. Here’s a sample problem screen. The tools available to solve the problem are in a tray off-screen to the right. 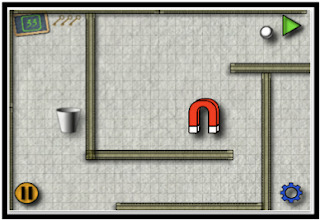 All problem-solving and no play is not the way to go so I downloaded the iPad version of SolarRola, a platformer (Donkey Kong style) game from the big-time game publisher Square Enix. Here’s a sample screen from the game. The graphics are great, the animation smooth, and the gameplay allows for either tilt-screen or key control. 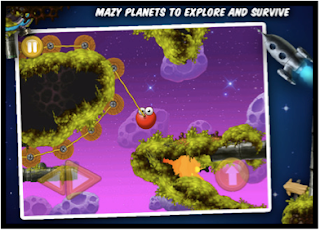 As focused as the boys seem to be in this photo, within 30 minutes they had moved from iPads to other forms of more active play. Like chasing each other through the hallways and up and down the stairs of a two-story house. 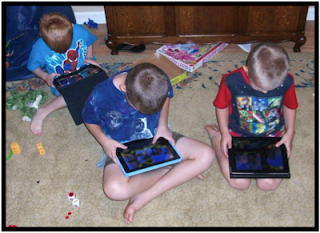 When we return to our home we are expecting to have a visit from Joshua and Jordann, our two oldest grand kids.
Posted by grandadscience at 4:06 PM 4 comments: