The Return of the Star Wars Pit Droids 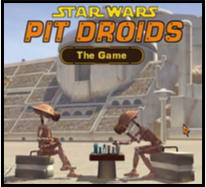 I have an iPad2 that I use for email, playing educational games, and face-to-face sessions with the grand kids.
I’m thrilled with the return to the iPad and iPhone of some of the better educational games that once lived only on the PC or Mac. For example, The Incredible Machine, the great Rube Goldberg PC and Mac game, is now available on the iPad.
I was especially excited to learn that Lucas Arts has re-released Star Wars Pit Droids, my favorite educational game of them all. The game is available in the iTunes store for the iPhone and iPad for just two bucks!
All of our grand kids have access to both computers and iPads so I will be putting Pit Droids on their iPads.
Click on the video below to view the opening scene that establishes the context for the story line that underlies the game.
Pit droids are transported from level to level by launchers like the one seen in the following video. The droids move from the launcher, in a straight line, until they step on a direction arrow.

The problem to solve in each puzzle is to get the droids into the correct pits that takes them to the next higher level and, eventually, to the Arena. The original PC/Mac game contained over 300 levels (puzzles) so there is plenty to do.
Pit droids can be unpainted, blue, red, yellow, or green. All pit droids obey white direction arrows
but colored arrows direct only pit droids of that color. Click on the video below to view an example of the use of colored arrows.

At the higher levels the problems are challenging for adults. In fact, there's a problem in the original PC version I've never been able to solve!. I even assigned the problem to university math undergrads and it still remained unsolved. I will be curious to learn if that problem is in the iPad version.
During the game's development I was often in contact with the lead game designer. The problem with educational computer games is that the better ones do not reflect school curriculum. I know and understand that sequencing is fundamental to creative writing and computer programming (programs are called APPS these days) and that students that are successful playing games like Pit Droids are honing those skills and having fun at the same time.
I told the game designer on several occasions that teachers and parents would not see the educational value of the game. I knew that the great educational games of the past (Rocky's Boots, Fix It!, and Robot Odyssey II) all won awards but were financial flops. Teachers and parents never adopted those games. Unfortunately, Pit Droids was also a financial flop and George Lucas soon closed the educational game division of Lucas Arts.
I'm thankful the game has been revived. Download the game, play it with the kids, and you will understand why.
Posted by grandadscience at 8:11 AM 1 comment:

Grandmother and I spent the recent holidays with our oldest son and his family in Yorktown, Virginia.  We hadn’t seen grandsons John and Andrew since the previous winter when they were living near Dayton, Ohio. Being an Air Force family, they are used to frequent moves.  There is so much colonial history in Virginia and we enjoyed visiting the Jamestown settlement and several other battlefields and historical sites.
When the boy’s mother and grandmother started putting lights on the Christmas tree they found a string of lights that didn’t work so she discarded the string.  The boys and I were sitting in the kitchen enjoying a snack so I asked if they would like to ‘light the light’. They weren’t sure what I was talking about so I went to the garage and got a pair of wire cutters from dad’s toolbox. I cut off several of the lights from the discarded strand, found a couple of batteries, some masking tape, and a rubber band and soon the boys were testing each of the lights cut from the strand to identify those that would still light up. 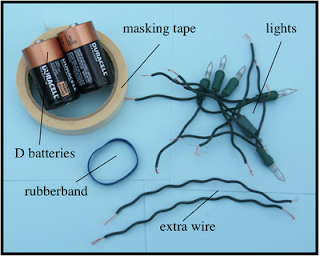 To make a safe source of electricity, I taped the two batteries together (bump (+) end to flat (–) end), stretched a rubber band lengthwise around the batteries, and secured the rubber band with additional wraps of masking tape. You should have a bump (+) on end and a flat side (–) on the other end of the taped-together batteries. 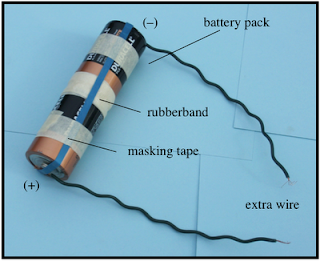 I cut about a dozen of the lights from the strand and then had the boys test each light. About half wouldn’t light so we threw them away. In the following picture John is testing one of the lights 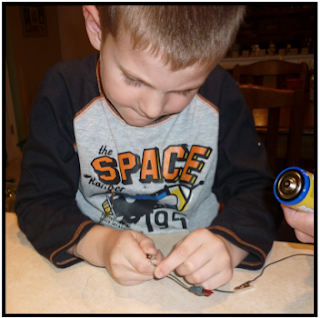 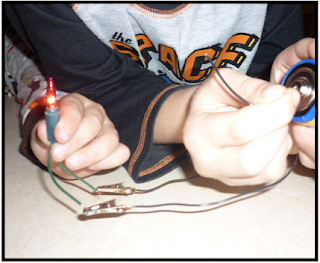 Once we had a set of working light bulbs I had the boys wire two of the bulbs end-to-end.  The bulbs are wired in series. 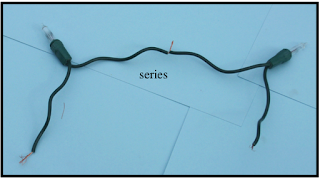 Next, I had the boys wire three bulbs together, three ends connected on one side and three ends on the other side. These bulbs are wired in parallel. 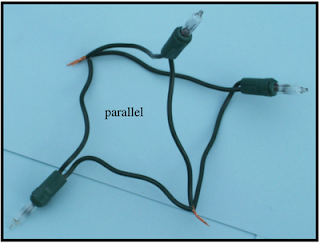 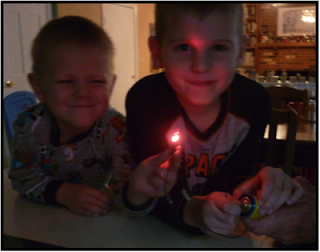