During a recent visit to our oldest son's family in Ohio, we arrived near the end of a snowstorm. The extreme cold weather made staying indoors, even for two boys, where they could play all day in their pajamas, very attractive.
The two grandsons, John and Andrew, play extremely well together. They also amaze us with their antics.
I grew up in a two-story house with carpeted stairs and my brother and I spent a lot of time playing on those steps, particularly in the winter. We slid down the banister, sledded down the stairs in a cardboard box, and shoved innumerable toys over the cliff to crash on the landing below. But we never thought of the method John and Andrew use, as seen in the following video, for getting from the upstairs to downstairs of their home.
John is in Kindergarten and Andrew is a year younger. One of the things John is learning in school is the use of time to regulate events. The clock now tells him when to get up, get dressed, eat breakfast and when to catch the school bus. But time is also used to measure the duration of an even
It’s common for kids at all grade levels to carry a cell phone. Besides a clock, the cell phone also has a calculator and stop watch. The boy’s dad, an Air Force officer with a degree in mechanical engineering, had the boys repeat the stair slide five times, using the stop watch cell phone function to measure and record the duration of each slide. Here’s the table dad sent. 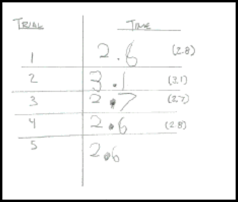 Besides learning that numbers can be attached to intervals of time, I wish I could have been there to hear how the boys related the numbers to ‘fastest’ and ‘slowest’! The larger the 'time' number, the slower the slide.
Almost all the physical science concepts John and Andrew will meet in school are measured using just three units; mass, length, and time (MLT) or combinations of two or more of these units. For example, 60 miles per hour has the units length/time.
Kids need a lot of hands-on experience measuring mass, length, and time separately before they are asked to understand concepts measured by combinations of two or more of these basic units. Timing the duration of an event with a stop watch, measuring the length of objects around the house, and checking the mass information on cans of food and are good activities for kids five years and older. The earlier kids learn that numbers describe properties of objects and events in the real world, the better. Don’t count on schools to do this.
Perhaps it's time to put a spring-load tape measure and a simple mass balance in John and Andrew’s  toy box and let them start connecting numbers to the real world and not the abstractions met in textbooks.
Posted by grandadscience at 9:36 AM