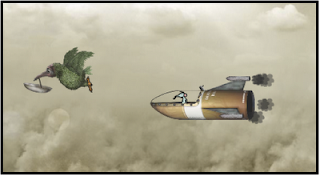 Grandsons John and Andrew are big fans of the computer games produced by the Amanita Designs studio. These include Samorost I and II (see April 2009 - Educational Games.1) and Machinarium (November 2009). Like any good storybook deserves repeated readings, good computer games deserve repeated play. During the holidays, I played through all three games with the boys, for the fourth time!
They like the storybook graphics, whimsical characters and stories, simple game play, and imaginative puzzles. Many of the puzzles involve operating a machine for which there are no instructions. They like these games so much that I did a Google search on ‘Samorost-like games' and found another contributor to this genre, Springtail Studio, that puts outs games equal in quality to Amanita Designs. The studio is found at
http://www.springtailstudio.com/blog/
and lists three games, Haluz,  Haluz2, and Alchemia, all three of which can be played online. I bought the extended version of Alchemia (5 more levels than the online version) as a $7 download that can be played offline.
Haluz is a story about a stolen TV satellite dish. The hero is a small, bluish character with protruding ears and a long snout.

A giant bird steals his satellite dish. This is the start of his pursuit of the bird, the dish, and ends in its eventual recovery. The following short video shows how to solve the first level. John and Andrew really like the rocket near the end of the level.
I was curious as to the meaning of haluz. An Internet search revealed that the author’s name is Tomas, he’s 27years old, and he lives in Slovakia. Slovakia is in Europe and is bordered by the Czech Republic, Austria, Hungary, Poland, Ukraine, and Romania!
He says he was inspired to write Haluz after playing Samorost. He also explained that haluz means 'tree-branch' and something weird, dream-like and funny (from the word “halucination”).

In a future post I will review Haluz2.
Posted by grandadscience at 11:38 AM