Fluid Play for Young and Old

If you’re fortunate enough to spend time with the grand kids (or your kids) this holiday season, here’s a science activity that’s easy to set up, quick to do, and extends the kids scientific knowledge about the states of matter.
Kids learn that matter exists in one of three states: as a solid, a liquid, or a gas. They are taught a set of characteristics they can use to distinguish one form of matter from another form. For example, a characteristic of a solid is that it holds it shape. It's a characteristic of a liquid that it takes the shape of its container. A gas also takes the shape of its container. Taking the shape of its container becomes a method for distinguishing a solid from a liquid.
But a solid can exist in many forms. Take a rock, hit it with a hammer to break it into smaller rocks, pound the smaller rocks into sand, and grind the sand into a powder. But sand will fill the shape of its container and also pours, like a liquid! A powder can also take the shape of its container but, unlike sand, does not flow like a liquid!
To the scientific eye, there’s much more to learn about the states of matter than just classifying matter as either a solid, a liquid, or a gas. It's time for the kids to explore!
Ask the kids to fetch the carton of table salt from the cupboard. Tell them to lift the spout and pour a small amount of salt into a cup. 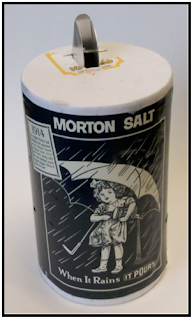 Ask them:
“Is salt a solid or a liquid?” [solid]
“Which is heavier, salt or air?” [They will of course tell you that salt is heavier than air.]
“Did the salt fall through the air?” [Yes.]
"Does salt pour like a liquid?" [Yes.]
"Why do you think the salt fell through the air?" [it's heavier than air]
Ask them to fetch a small funnel and to put the salt back into the carton.
Here’s a picture of sand streaming from the tip of a funnel. Salt and sand are called granular solids. To provide the kids another example of how a granular solid flows like a liquid, show this picture. 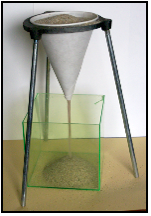 Materials
Glass eyedropper (if you have a plastic eyedropper, wrap thin  wire around the tip end so that it will float vertically)
Food coloring (use red, blue, or green, not yellow)
Two-liter soft drink bottle (remove the wrapper and use a commercial goo remover or citrus juice to clean off the glue)
Have the kids follow these steps:
1.   Fill the two-liter bottle with cold tap water, all the way to the top.
2.   Half-fill a teaspoon with red, blue, or green food coloring.
3.   Use the eyedropper to suction up as much of the food coloring as possible.
4.   Carefully lower the eyedropper into the neck of the water-filled bottle (see picture) and wait.

5. Soon, the food coloring will flow from the tip of the eyedropper. Have the kids observe the motion of the food coloring.
6. Talk with the kids about what they've just done.
The food coloring is slightly heavier than water so, like sand falling through air, the food coloring falls, in an almost straight line, through the water until the flow line becomes turbulent and mixing starts.
In this science experience, food coloring, a liquid, falls through water like salt or  sand falls through air!
To a scientist, a fluid can be either a liquid or a gas. An important branch of science is called fluid dynamics and fluid dynamicists study the  motion of fluids.
In the next post, just before Christmas, I’ll show you and the grand kids how to grow a fluid Christmas tree in a bottle of water.

Posted by grandadscience at 5:02 PM