In the previous post (Fluid Play for Young and Old), you learned that food coloring is heavier than water and falls through water, in a straight line, with little mixing, just like salt and sand falls through air in a stream. A more accurate term than 'heavier' is density.
Density is the mass per unit volume of a substance and provides a method for directly comparing substances. The volume of a kilogram of marshmallows is much much greater than the volume of a kilogram of lead. Therefore, the density of lead is greater than the density of marshmallows.
In this activity, the food coloring is denser than water but salt water is denser than both the food coloring and water.
Gather the kids and the following materials and let them grow a fluid Christmas tree.  You may want to do the cutting for the kids and let them take over once you have the apparatus ready to go.
Materials
Glass eyedropper
Green food coloring
Card stock 2-inch square
Plastic margarine or whipped cream top
Two-liter bottle, empty and clean

Depending upon the ages of your young learner's, you can either prepare the apparatus or supervise their doing the cutting and punching. 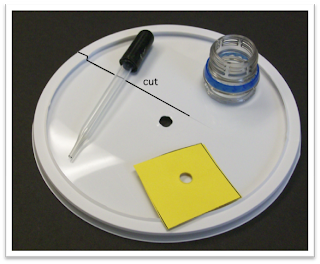 • Cut the top from the two-liter just below the curve of the neck
• Trim around the neck so that the neck sits level (see picture)
• Cut a straight line to near the center of the plastic lid
• Punch a 1⁄4-inch hole near the center of the lid
• Cut a two-inch square of card stock or thin cardboard and punch a hole near its center
Now it’s time to setup the apparatus to grow the tree.
Ask the kids to:
•   Pour enough water into the plastic two-liter bottle to so that it is about 1⁄3 full
•   Add table salt, one teaspoon at a time, stirring constantly, until no more will dissolve
•   Let the water sit for about 15 minutes
•   Place one hand, palm up on the surface of the water and carefully pour tap water into the palm, raising the hand to keep it on the water's surface, until the container is almost full (important – do not stir the water!)
•   Slip the glass eyedropper through the hole in the cardboard square
•  Half-fill a teaspoon with red, blue, or green food coloring and use the eyedropper to suction up as much food coloring as possible
•  Place the bottle neck over the hole in the lid and carefully set the eyedropper in the bottle’s neck 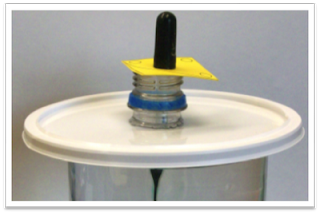 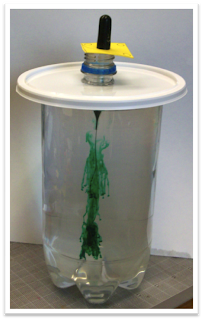 After an hour or so, the food coloring appears to be collecting in a blob near the bottom of the bottle but is not mixing with the greater volume of fluid. 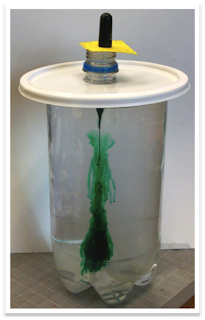 Now, everyone can do other things while the tree grows. It takes about four hours for the tree to grow but, as the following picture shows, it's well worth the wait. After an hour or so, the food coloring appears to be collecting in a blob near the bottom of the bottle but is not mixing with the greater volume. As the tree grows, the horizontal branches broaden. 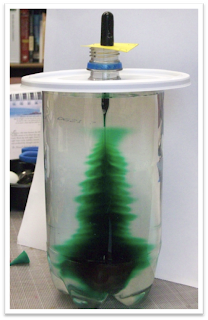 As Christians, Christmas is the time we celebrate the birth of our savior, Jesus Christ. Grandadscience and grandmother math wish every believer in the the true meaning of Christmas, a very Merry Christmas.
Postscript
This 'tree' effect was demonstrated by grandadscience and a prominent Los Alamos physicist at a conference of fluid dynamicists. Attending physicists were challenged to offer an explanation but to date, none has been offered. Certainly the collision of the higher density food coloring with the even higher density salt water is at the heart of the effect.
Posted by grandadscience at 5:50 AM