Image on the Edge

“All physicists use their heads, the best also think with their fingers.”
Dr. George Polya 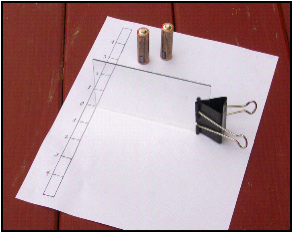 In previous posts, we've looked at two ways to establish the fact that the image in a flat mirror appears to be as far into the mirror as the object is in front of the mirror. Here’s a third method and one that kids like to do. Once you've gathered the materials, show the kids or grand kids how to setup and do the investigation (as illustrated and described below) and then let the kids view the video and repeat the investigation.
Materials
Plane mirror with binder clip (or anything else to hold the mirror upright)
Two, tall, identical objects
Sheet of paper
Ruler
As shown in the picture above, use a ruler to draw a line parallel to the left edge of a sheet of paper. Mark the line in inches. [Send an email to www.grandadscience.com  and I will send you a pdf file of the ruled page as seen in the picture.]
Attach the binder clip to the right edge of the mirror and place the mirror perpendicular to the ruled line at a point about halfway along the line. Place a tall object (like a AA battery or one of an identical set of salt and pepper shakers) on the ruled line so that half of its image is visible along the left edge of the mirror.
Set the other object on the ruled line, behind the mirror. Your setup should look something like what’s seen in this picture. 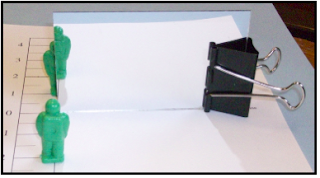 Observe that the half-image along the left edge of the mirror does not align with the object behind the mirror. The mirror image may appear to be behind or in front of the object. 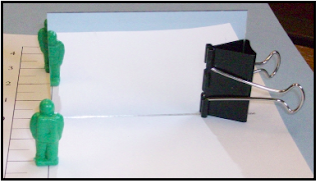 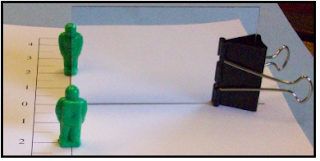 Here is an animation I created that summarizes the on-edge method. It’s a short, 45-second video.
With the holidays fast approaching. in the next post I will recommend the right microscope to purchase for your kids or grand kids.
Posted by grandadscience at 12:33 PM