In an earlier post (see June 2010) I announced a forthcoming series of posts on Scratch, the programming language especially designed for (but not limited to) kids.
Scratch asks its users to imagine, program, and share. As an example of this three-step sequence, I’ll describe a project of mine that I imagined, programmed, and shared (uploaded) to the Scratch homepage.
Imagine four motionless ants sitting at the corners of a square, all facing in the counterclockwise direction. 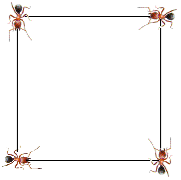 At a given signal, each ant moves towards the ant ahead of it. What will the paths of the ants look like? Decades ago, I saw this questioned posed in a book. This was long before we had programming languages like Scratch to provide a wordless, dynamic, answer.
Program
The script (program) that answers the question is not an entry-level program but Scratch contains two commands that greatly simplifies the programming; point towards and move 5 steps. Since the ants are numbered, it's easy to point each ant towards the ant in front.

To view what happens when the ants are turned loose, click on the following short, one-minute video. What’s not visible in the video are the scripts that create the ant’s motion.
Share

As can be seen in the video, the ants trace a spiral path and the straight lines connecting the ants always form a square.
I uploaded the working Scratch file to the Scratch web site for any user to look at and any registered user to download. If interested, Scratchers can modify the program to make it do what they would like it to do. For example, what if three ants are at the corners of a triangle? To view my Scratch projects, go to www.scratch.mit.edu and search on grandadscience.
The Scratch homepage contains data as to the age and numbers of registered Scratch users. Tens of thousands, at each of the ages 11 through 16, form the bulk of Scratch users. Few are getting instruction in public schools. It would appear that kids are learning how to program in Scratch from each other! Also, girls are as well represented as boys.