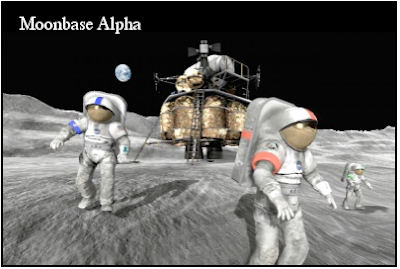 Moonbase Alpha is a FREE, NASA-funded, computer game set on a hypothetical lunar outpost. A wayward asteroid hits and knocks out critical life-support systems. The player (or group of 2-6 players) has to analyze the situation and restore the systems before emergency supplies are exhausted.  To do so, the astronaut must use a variety of tools including a remote-controlled robot.
During a recent visit, grandson Joshua (he starts the fourth grade this year) played through Moonbase Alpha in about 45 minutes. After a brief time experimenting with the mouse and keyboard controls, Joshua went on to successfully play through the game to the end. He then challenged me to better his time!  In the following picture, Joshua is controlling the astronaut as the astronaut sets up a repair station. 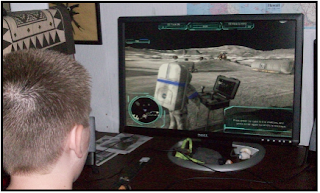 In this photo, Joshua, from the perspective of the controlling astronaut, sends a repair robot into an area too dangerous for the astronaut to enter to replace a damaged life support system component. 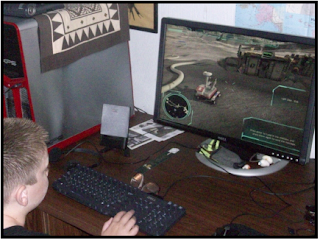 As adults, we can help kids by understanding that even though we may feel uncomfortable playing a video game, our kids do not. Why not put quality gaming experiences in our kid's environment and simply out of the way. By the way, I have not bettered Joshua's time. Yet.
Here's the link to the NASA web site where you can learn more about Moonbase Alpha. The site will also direct you to the Steam home page where you can search on Moonbase Alpha and download the game (PC only). If you don't already have the free Steam client software, you will have to download and install it before Steam will download the game to your computer.
http://www.nasa.gov/offices/education/programs/national/ltp/games/moonbasealpha/index.html
Posted by grandadscience at 5:13 PM 28 comments:

The Two Of You


"The world is full of obvious things which nobody by any chance ever observes." So said Sherlock Holmes in "The Hound of the Baskervilles".
One of those 'obvious thing's' found in everyone’s world is a flat mirror. There's probably one hanging on your living room wall and for sure there is at least one where you shave or comb your hair.
Ask your kids or grand kids to stand in front of a mirror and tell you what they see. They will see a lot of things like their own image, objects in the room, their hair is uncombed, etc., but they will not observe that their image appears to be behind the mirror!
Ask them to touch the nose of their mirror image. In trying to comply with your request, they should observe that instead of the finger touching the nose, it touches the surface of the mirror!
When looking into a flat, plane mirror, there is the real you, in front of the mirror, and then there is a virtual you, an image of you (cleverly called mirror image), as seen in the mirror! The two are not exactly identical.
To observe a difference between the two images, ask the kids to look into a mirror, close their right eye, and observe which eye the mirror image closes. It comes as a shock to most that the mirror image closes its left eye!
The word AMBULANCE is often painted in its reversed form,

on the front of the vehicle. A driver, looking into the rear-view mirror, sees

and correctly identifies the vehicle as an emergency vehicle and pulls to the side of the road.

To demonstrate, I've printed a page with the word AMBULANCE reversed on the page (I have graphics software that reverses text). When viewed in a plane mirror, the mirror left-right reverses the word so that it reads correctly, just as you would see it spelled correctly in your rear-view mirror. 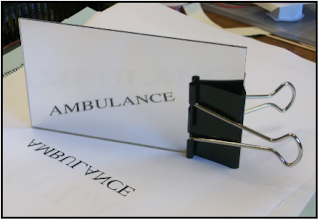 Besides the left-right reversal, there are several interesting mathematical and scientific relationships to be discovered exploring mirror reflection. Here's a good question to ask. Since a plane mirror reverses left and right, why doesn't the mirror reverse up and down?
In the next mirror post, I will explore the relationship between the distance an object is in front of a mirror, and the distance the image appears to be behind the mirror. I know several ways to demonstrate this relationship so I'll start with the simplest and most intuitive method.
Posted by grandadscience at 9:00 AM 2 comments:

The Adventures of Little Wheel 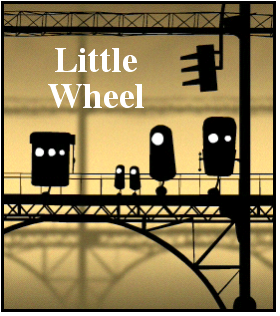 Grandsons John and Andrew love stories and games that feature robots. We’ve played through Machinarium, a great computer game about a city of robots. Machinarium (see the November 2009 post) is long enough to tell a good story, full of fun problems-to-solve, but can hold the rapt attention of a four and five-year old when played with an adult (like a grandfather or grandmother). Every night, for two weeks, I played through Machinarium as John and Andrew's bedtime story.
There are hundreds of web-based games and I keep my eye out for those that I would like all of our grand kids to know about and, if they choose, play. I recently found a game that features a robot so this post is especially for John and Andrew (and any other grandparents, parents, or teachers) that appreciate good interactive stories).
Little Wheel is a sentry robot living in a city populated only by robots. Watch this brief introduction as it sets the story and calls Little Wheel to the stage. [When you play the game online, you can skip this intro by clicking on 'Skip' in the lower right corner of the screen.]
The bolt of lightning that struck Patrol Tower #2 provided Little Wheel with enough juice to get moving on solving the problem of restoring electrical power to all of the robots in the city.
The problems Little Wheel has to solve to restore electrical power are not difficult but do require the player to pay 'attention to detail', which is an important problem-solving skill. As a new level is reached, a series of white circles appear that identify where on the screen an action is required to move the story forward. The white circles eliminate the need to click all over the screen to find 'hot points'.
In the following short, one-minute video, I show how to use the white circles to solve Little Wheel's first problem, calling an elevator.
Little Wheel is a short game and is designed to be played through in a single session. There is not a 'SAVE GAME' button so don't look for one.
To play the game, go to either of these sites. Have fun.
http://www.kongregate.com/games/fastgames/little-wheel