I’m always on the lookout for quality craft kits for the grandkids to build when they visit for more than a day or two. I recently visited www.RLT.com and found a gold mine of quality kits suitable for ages eight and above. The kits are organized around these themes: Bridges and Towers, Levers and Gears, daVinci Kits, and Catapult Kits.

I purchased Leonardo daVinci's Self-supporting Arch kit (and three different catapult kits) from the online store and three days later the kits arrived. A tracking number was provided and it was easy to watch the progress of the package as it traveled from Texas to California.
Preparing the Kits for the Kids
The instructions state that scissors can be used to separate the individual pieces from the stock. The wood is a quality hard wood. and my old hands found this difficult to do so I used my Dremel tool to separate the pieces and sand down the short nubs left on each piece.

For any kit you plan to give to the grandkids or kids, I recommend that you first separate the pieces, sand down the nubs, and put the pieces along with the instructions in a Ziploc® plastic bag.

To keep the pieces from getting soiled by dirty hands, I applied a single coat of Deft to each piece. You can buy Deft at any paint store and a can of it will last a long time. After a light sanding, each piece will be sealed, smooth, and will clean up with a damp rag.
Grandson Joshua and granddaughter Jordann recently spent the weekend in our home. To pique Joshua's interest, I erected the bridge on the patio table while the rest of the family was chatting around the kitchen table. I told Joshua to go to the patio and check out the bridge on the table. He left but soon returned. “What happened?” I asked. ”It fell apart!” he replied. Tricking Joshua in this way drove home the point that because the timbers of the bridge were not fastened together, a force applied to the bridge in any direction other than straight down would collapse the bridge.
To see how this works, let’s build the basic support structure that is just repeated to lengthen the bridge. There's a total of 21 pieces in the kit. The completed arch is formed from 14 long beams and 7 short cross beams.

Six arch beams and three cross beams fit together to form the basic support structure. Each piece fits into a notch in another piece. Pull up on the center cross beam (see picture) and the structure falls apart. Push down, and the sructure becomes more rigid.

There are enough long and short timbers to build two self-supporting bridges with three pieces left over. 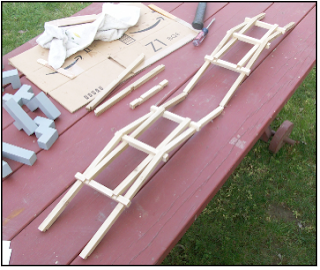 One person can construct the larger bridge but it's easier if one supports the structure as another places the next piece. In the following picture Joshua sets the last piece. The bridge collapsed twice but Joshua's smile indicates success on our third attempt. 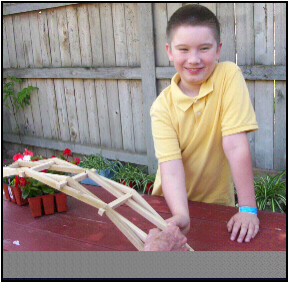 Joshua is in the third grade and Leonardo’s bridge would make a great report topic for school. Leonardo designed the bridge in the late 15th century. His use of interlocking timbers that required no fasteners meant an army could transport the parts of the bridge from site to site. When needed, engineers could quickly and easily span gullies and streams.
In a later post I will describe the construction of one of the catapult kits
Posted by grandadscience at 9:46 AM