I have further evidence that ghosts exist (see the post Do You Believe In Ghosts? in the April folder). In that first post, I defined “ghosts” as unseen entities that can exert an influence on objects in the physical world.

I have a cardboard box about a foot high with width and length dimensions slightly larger than a standard sheet of copy paper. I was going to use the box as a bin for storing recyclable paper. Anymore, Grandad doesn't believe in wasted motion so I don't wad a sheet of paper before dropping it in the box. I simply slip the sheet into the mouth of the box and let go. 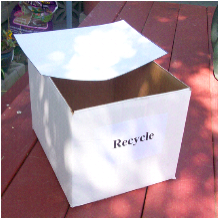 The first time I did this, I was amazed at the result. Check this video to observe what happened.

Having been bitten and infected by the dreaded “science” bug early in life, all I could say when I first observed this action was, “That is so cool!” Again, those unseen entities I call ghosts were able to work together to slow the fall of the sheet of paper.

The “ghosts” are invisible air particles floating around in the box. Let’s call them “air ghosts”. Even though unseen, they are quite capable of exerting an upward force on the sheet of paper, as seen in the video. 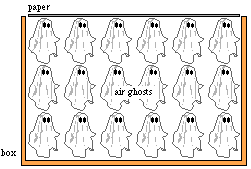 When you slip the sheet of paper into the mouth of the box, the forces acting on the paper are gravity, which acts to pull it down, and the upward push of the air ghosts. 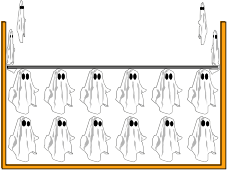 Ah ha! Even though I couldn’t see you, I know you are there!

Posted by grandadscience at 9:12 AM