The Zoo of Exotic Geometry

Much of elementary school mathematics is, quite simply, mindless drudgery. The math curriculum equates arithmetic, a necessary but pedestrian branch of the subject, with all of mathematics. Doing so wears out most students long before they have a chance to learn how deep, broad, and downright beautiful the subject really is.

Even geometry, the tool used by the artist, architect, scientist, and engineer to think about shape and space, is presented as a series of dry “namings” and classifications of triangles and four-sided figures.

You don’t take kids to the zoo to look at cats and dogs like those found in our neighborhoods! You go to see “exotic” and extraordinary creatures.

Let me show you an animal, the Möbius Band, from Grandad’s Zoo of Exotic Geometry. First identified by the German mathematician August Ferdinand Möbius in 1858, his band is easy to make, fun to explore, and you and the kids will remember it as one of geometry’s most fascinating creatures. 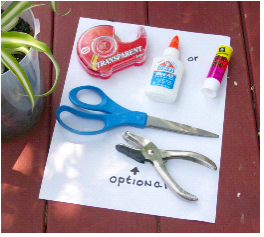 Cut a sheet of copy paper lengthways into strips about 1 1⁄2 inches wide. Give each of the kids a strip and tell them to select their favorite crayon and color one side of the strip.

Have the kids form the strip into a ring by gluing or taping the ends. It’s not important whether the colored side is the inside or outside of the ring. 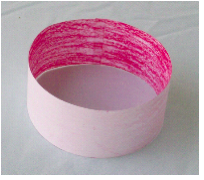 Ask how many sides a ring has and they will tell you two (an inside and an outside). Inquire as to the number of edges, and they will identify two, a top edge and a bottom edge.
Tell the kids to imagine that they are a tiny ant, walking on one of the sides of the ring. Ask, “Is possible to walk from one side of the ring, to the other side, without crossing an edge?” The answer is “no” because it’s the edges that separate the two sides of the ring.

Give the kids another strip and tell them to label the ends as shown in the following picture. 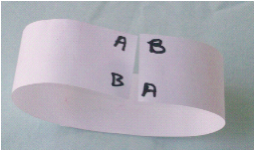 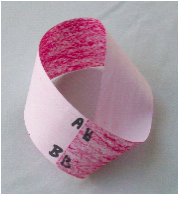 They have now created a Möbius band. To get them to focus on the fact that the Möbius band has geometric properties quite different from a ring, tell them to continue coloring the band until it is completely colored as shown in the following picture. 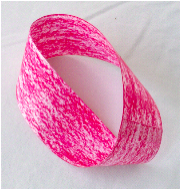 As they color the Möbius band, they might realize that they never crossed an edge but still managed to color the whole Möbius band. The band has a single side, not two! To help them better compare the ring and Möbius band, have the kids put them side by side and use a finger to trace along the edges of each figure. 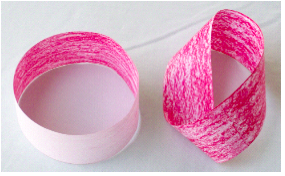 They will discover that the ring has two distinct edges. The finger has to be lifted from one edge and placed on the other edge in order to trace both edges. For the Möbius band, they discover that it has a single edge! An ant on the inside of the ring will have to cross an edge to get to the outside of the ring. An ant on the surface of the Möbius band can visit every point on the band without crossing an edge!

To summarize the experience, have the kids make a copy of this table and record the number edges and sides for each of the figures.

This post is getting long and we’re not yet through exploring the geometric properties of a ring and a Möbius band. I’ll save for a later post how to use the hole punch and scissors to reveal even more surprises about the ring and Möbius band.

Grandad made the Möbius Band shown in the following photograph when he taught middle school science and mathematics during the late 1960s and early 1970s. It hung in my classrooms through those years and in my various offices, up to the present time. The band is made from a thin metal strip and the mouse has a magnet in its base that keeps it stuck to the band. 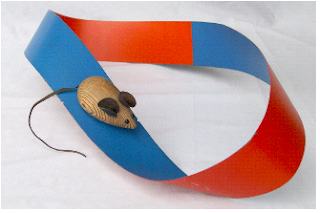 The Möbius band truly is an exotic geometrical animal.

Posted by grandadscience at 12:01 PM No comments:

My all-time favorite science ”toy” is the Stomp Rocket. 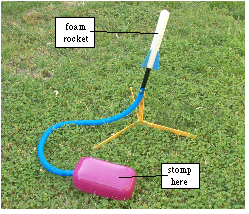 Slip a hollow foam rocket onto the launch tube, stomp on the plastic bladder, and, with a loud “pop”, the rocket will reach a height that will amaze both you and the kids. All you have to do is launch one rocket and get out of the way. The kids will take over.  Kids get so excited stomping rockets that I made myself the Range Safety Officer. I won’t let anyone stomp a rocket until everyone is a safe distance from the launch tube.

Two of our grandsons, John and Andrew, live in Belgium (dad is an officer in the United States Air Force and mom is studying music at the Master’s level). John, the oldest, is not yet in Kindergarten. By the time kids enter Kindergarten, they have developed an operational understanding of the physical world. They already know about “forces” and how forces influence “motion” (perhaps “bump” is a better word than force and “run” is a better word than motion).

What they don’t yet have (or need) is a scientific vocabulary to talk about their experiences.

John was recently found (caught?) jumping from the high ledge of a driveway planter onto the bladder of his stomp rocket. Without help from us, John had worked out the relationship between the height from which he could jump and the height reached by the rocket. He figured out that there is a direct correlation between the two!

Here’s a sequence of still pictures that show John stomping his rocket.

As John sets himself up to jump, that boyish look in his eye makes me glad he doesn’t have a nearby barn roof to jump from. 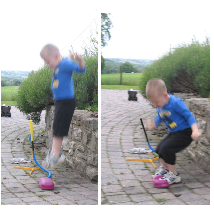 After absorbing the landing shock, he straightens to see how high the rocket flew. 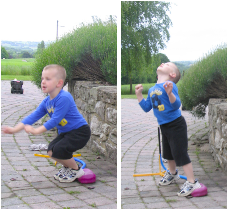 As is often the case with boys and their toys, a scuffed or hurt knee is the price paid to reach the outer limits.

At a later point in time, when John is in middle school, we will get out the old stomp rocket (or better yet, buy a new one), stomp off a few, and then talk about force, impulse, potential energy, kinetic energy, pneumatics, and all of the other science concepts demonstrated (in the real world and not just in a book) by using a stomp rocket. We can even use a bit of mathematics to measure and compute the height reached.

Thanks to mom and dad for taking the pictures and sending them on to grandad, grandmother, and all of you readers.

Fifteen bucks will buy your kids and grandkids a stomp rocket. Believe me, you can spend ten times as much and get a hundred times less for your money. Contact:

The service is FAST!

One of the first educational games marketed for the Apple II computer was called The Factory. Factories are all about sequencing a series of operations, in the correct and most efficient order, so as to produce a product.  Sequencing is a basic skill needed for clear writing, mathematical and scientific problem solving, and computer programming.

As good as The Factory was, an even better game is Factory Balls2, a free web game by Bart Bronte.

To play the game, go to: 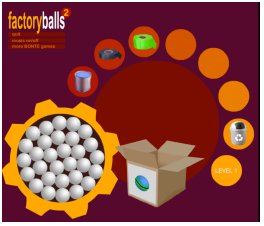 To manufacture this product, grab a white ball from inside the gear and paint it blue by dropping the ball in the bucket of blue paint.

Pass the blue ball over the green tape circle to put a green band around it.

Finish by moving the ball over the black tape circle. This will place a thin black band on top of the green band.  The completed product drops into the cardboard box, the box closes, moves off the assembly line and is replaced with a box picturing the next product to be made.

If at any point in the process a mistake is made, drop the ball into the waste can and get a new ball from inside the gear.

The game even saves your progress from visit to visit. As you move up the levels, the products get more complicated and therefore more complex to manufacture. 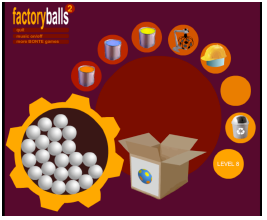 Factory Balls2 is easy to play, attractive, and exercises sequencing, an important problem-solving skill. As you move up the levels, the products become very challenging (even for grandad) to manufacture.

Posted by grandadscience at 7:59 AM 3 comments:

A young mother sent in pictures of her three-year old son Malachi and his Soma cube. Would an ice cream cone elicit any prettier smile? 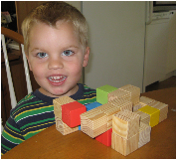 Fitting the Soma pieces together is much more challenging than stacking the single cubes of a traditional set of blocks. Since each Soma piece is different in shape, they fit together in different ways.  Making a cube from the seven pieces isn’t an important task for Malachi. Simply fitting the pieces into any shape exercises his ability to think about three-dimensional space and how the pieces fill that space. In his exploring, Malachi may even fit two or more pieces together and build a structure where its parts are physically separated. For Malachi, or any other youngster, it’s not about what’s right or what’s wrong, or getting “solutions”, it’s about the simplicity of the materials, and the structures that young minds can create to meet their needs. 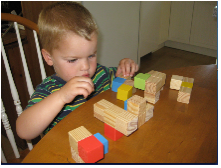 Let’s all do the best we can to provide our kids and grandkids a rich learning environment full of interesting objects and useful tools.

Thank you mom for taking the time to send Malachi’s photos to grandadscience.

Posted by grandadscience at 4:36 PM No comments: